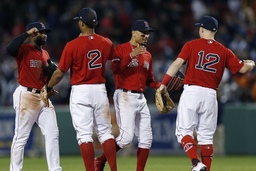 BOSTON (AP) The Boston Red Sox pieced together a victory by going to the bullpen six times.

The problem is they'll need to pile up wins and very likely need some help to make the postseason.

Mitch Moreland hit a three-run homer and seven pitchers combined on a three-hitter to lead the Red Sox to a 6-1 victory over the New York Yankees on Friday night.

"It's definitely going to be difficult," Moreland said. "We're not in the best of spots, but everybody in here is continuing to fight and try to help the team win."

Xander Bogaerts added a two-run double and Moreland two singles for the Red Sox, who won for the 13th time in 19 games but the defending World Series champions remained 6 1/2 games out of the AL's second wild-card spot with 21 games to play.

"It's an uncomfortable game for hitters. You see four different pitchers," Red Sox manager Alex Cora said. "We're just in a position right now that we know that we have to do this."

Brett Gardner homered for AL East-leading New York, which lost for just the third time in 11 games. The Yankees lead atop the East dropped to 8 1/2 games over Tampa Bay, a 5-0 winner at home against Toronto.

"We just didn't mount a whole lot offensively tonight," New York manager Aaron Boone said. "Certainly, part of that is them being able to match up, but part of it we just had a down night."

New York starter Domingo German (17-4) gave up five runs in 4 1/3 innings, allowing three hits with four walks and five strikeouts in his bid to become the majors' first 18-game winner. He had given up two or fewer runs in three of his last four starts.

"It's a little different but it's September baseball, unfortunately. We've got three more weeks of that," Gardner said. "It's part of the game. It doesn't matter who we're facing or how many times we see them, our job is go out there and put good at-bats together and try and score runs."

With the Yankees entering Fenway Park with a 16 1/2-game advantage in the standings over the third-place Red Sox, the matchup hardly held the billing usually provided the rivalry.

Boston moved ahead 4-0, scoring all the runs with two outs in the fourth. Brock Holt had an RBI single on a grounder that took a bad hop past second baseman Gleyber Torres before Moreland hooked his homer around the Pesky Pole.

Gardner hit his to right off Andrew Cashner in the fifth, but Bogaerts' two-run double off the Green Monster came in the bottom half off reliever Nestor Cortes Jr.

Yankees C Gary Sanchez and DH Edwin Encarnacion both visited former Red Sox slugger David Ortiz Friday at his residence. Ortiz is in the area recovering from a gunshot wound suffered in the Dominican Republic in June.

Sanchez talked before the game about how Ortiz texted him and helped when the catcher was struggling last season.

"I know it's someone that obviously Gary looks up to a lot, and obviously David carries a lot of respect not only here but across the sport. He's a giant in our sport," Boone said. "If Big Papi's helped him out a little bit, I'm grateful for that."

Boston starter Jhoulys Chacin, signed by the Red Sox on Aug. 31 after he was released by Milwaukee, pitched two hitless innings. striking out four in his debut with the club. When he walked off and shook Cora's hand, he slipped down the stairs. He was OK and laughing.

Yankees: LHP CC Sabathia (right knee inflammation) threw a bullpen session that Boone called "a positive step." ... Boone also said LHP Jordan Montgomery (recovering from left elbow surgery in March) has "put himself in the mix" for October based on his recent work. He could make another rehab start Monday. ... RHP Luis Severino (rotator cuff inflammation) pitched three innings for Double-A Trenton, giving up one run on five hits, striking out five without any walks. RHP Dellin Betances also pitched a hitless inning at Trenton, striking out one and walking one.