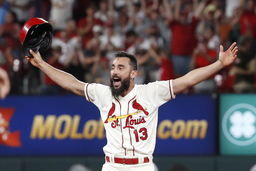 ST. LOUIS (AP) The moment was not too big for Matt Carpenter.

Carpenter and Harrison Bader hit run-scoring singles during St. Louis' two-run ninth inning, and the Cardinals beat the Cincinnati Reds 3-2 on Saturday for a sweep of their day-night doubleheader.

"I think the big thing is being in control of my emotions in that situation and having been in that spot before and just taking a good swing," Carpenter said. "Having a competitive at bat in that spot and not let the moment get to you."

Each of St. Louis' four batters reached in the ninth. Tommy Edman singled and Yadier Molina was hit by a pitch from Raisel Iglesias (2-11) before Bader tied it at 2 with a single to left.

"Everybody in here that's got a locker has contributed in a big way," Carpenter said. "There's no one here that is just taking up space and that's rare. On a big league team, there's usually a couple of guys who are just around. That's not the case here."

Kevin Gausman then came in, and Carpenter's pinch-hit single drove in Molina for the dramatic victory.

"Carp's a really talented guy and he's proven and he's been proven in this arena," Cardinals manager Mike Shildt said. "When we get closer to October and into October, that's the kind of guy that you want to draw from."

Dakota Hudson led the Cardinals to a 10-6 victory in the opener, striking out eight in a career-high 7 2/3 innings. Dexter Fowler and Yadier Molina homered, and Kolten Wong and Paul Goldschmidt each had two hits and two RBIs.

"Just trying to attack," Hudson said. "We've got two doubleheaders coming up so trying to do as much as I could and get as deep into the game as I could. That was just part of my plan."

St. Louis and Cincinnati will play another doubleheader on Sunday after the series opener was postponed by rain. Saturday's doubleheader was needed after rain washed out their game on June 5.

Hudson (14-6) allowed four runs and four hits. John Gant (10-0) got the win in the second game after he escaped a bases-loaded jam in the ninth.

Cincinnati wasted a terrific performance in the nightcap by Sonny Gray, who allowed an unearned run and five hits in 6 2/3 innings.

"I very easily could have given up four or five runs," Gray said. "The plays that we made were really game-saving plays, at least three of them. The outfield made some great catches and some great plays. I've just got to try and keep going."

Iglesias has allowed runs in four of his last five outings. The Reds closer has three losses during that span.

"The big thing for him is we have to make sure he doesn't lose confidence," Reds manager David Bell said. "No matter what situation he's pitching in, we need him. We need to be there for him, to support him, and help him get through this."

Josh VanMeter drove Michael Wacha's first pitch of the game over the wall in right, and Joey Votto went deep in the third for his first homer since coming off the injured list Tuesday.

But that was it for the Reds against Wacha, who struck out seven in seven innings, matching his longest outing of the season.

"I know what kind of stretch we're on here for the next few days with the doubleheaders and stuff," Wacha said. "I was just trying to go as deep as a I could and keep that pitch count down and keep attacking hitters."

Reds right-hander Trevor Bauer (10-12) pitched just four innings in the opener. He was charged with six runs and seven hits.

The Cardinals recalled left-hander Genesis Cabrera as the 26th man for Saturday's doubleheader and will activate right-hander Daniel Ponce de Leon before his start in the nightcap of Sunday's doubleheader. Both will stay with the club.

Right-hander Sal Romano was recalled from Triple-A Louisville as the Reds' 26th man for the doubleheader.

Cardinals: OF Lane Thomas (right wrist fracture) was placed on the 10-day IL, and OF Tyler O'Neill (left wrist strain) was activated from the IL.

Right-hander Tyler Mahle (2-10, 4.93 ERA) will start Game 1 for Cincinnati on Sunday. He faces Cardinals right-hander Miles Mikolas (8-13, 4.23 ERA), who is 0-3 with two no decisions in his last five start against Cincinnati.