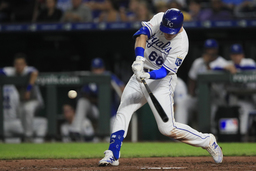 KANSAS CITY, Mo. (AP) The Kansas City Royals and Oakland Athletics spent the night trading big blows, and they weren't limited to the balls they kept sending out of spacious Kauffman Stadium.

Three guys were hit by pitches, too - one of them smack in the helmet.

Yet it was Hunter Dozier who delivered the timeliest hits on Wednesday night, belting a two-run homer in the third inning before driving in the go-ahead run with a base hit in the seventh. When Tim Hill notched a pair of perfect innings in relief, and Ian Kennedy survived a harrowing ninth, the Royals had escaped with a 6-4 victory against a club that has owned the AL Central all season.

"We've had some opportunities the last two games to get some runs or tack on some runs and we didn't do it," Royals manager Ned Yost said. "Tonight was a pretty good night for our offense."

Hill (2-0) dazzled in relief of Jacob Junis before Kennedy kept everyone on edge. He walked Jurickson Profar to begin the inning, then struck out Chris Herrmann and Corban Joseph, before Marcus Semien singled to bring the go-ahead run to the plate. Kennedy responded by getting Robbie Grossman to hit a lazy flyball to left field to earn his 23rd save this season.

"It was set up perfectly for Timmy," Yost said. "The way their lineup was set up was perfect. He threw the ball extremely well. Then Ian came in with great stuff, too."

Blake Treinen (6-5) faced four batters in the seventh inning without recording an out for Oakland. He allowed three hits and a walk, and Jake Diekman allowed one of his inherited runners to score.

"It's frustrating when you feel when you feel like your stuff is playing well and you're locating," Treinen said. "I think I only missed the spot once."

Semien and Mark Canha homered for the A's, who twice blew two-run leads in squandering a chance to go a season-best 22 games over .500. Oakland (76-56) had won 19 of 24 against the Central Division.

The big blows began with the second pitch, when Semien launched a solo shot off Junis to give the A's the lead. The Royals' starter proceeded to hit Matt Chapman in the helmet with a pitch two batters later, the impact launching the headgear all the way toward the warning track.

Chapman stayed in the game to score on Seth Brown's groundout before heading for the clubhouse.

"He's all right, no concussion symptoms as of right now," A's manager Bob Melvin said. "That was scary."

The Royals tied it in the third when Tanner Roark served up Dozier's two-run shot. The homer over the left-field bullpen was bookended by Roark hitting Whit Merrifield and Alex Gordon with pitches.

Oakland jumped back ahead in the fifth on Canha's two-run homer, and the Royals quickly answered over the next couple innings. Jorge Soler got the first run back with an RBI double in the fifth, and O'Hearn tied it 4-all when he belted a 0-2 pitch to right field to open the sixth.

"Got off to a tough start. Command was all over the place," Junis said. "I kind of grinded through it and figured a way to get through six innings and give us a chance."

Chapman immediately headed toward first base after he was hit in the helmet, and even shook off a trainer who came out to visit him. But he was eventually replaced by Chad Pinder as a precaution.

The Royals have shut down right-hander Brad Keller for the rest of the season after noticing a drop in velocity. The 24-year-old Keller, who was pounded by Oakland on Monday, already has thrown a career-high 165 1/3 innings. "I didn't see anything after his last start that I wanted to see the rest of the year," Yost said. "His future is too important."

Yost declined to discuss speculation that Royals owner David Glass is negotiating with local businessman and Indians minority owner John Sherman on the sale of the franchise. But the skipper did spend time talking about the passion Glass has for baseball, and Yost said delivering the 84-year-old owner a World Series title in 2015 was one of the highlights of his career.

A's designated hitter Khris Davis was a late scratch when he left to be with his wife, Jill, for the birth of their second child. He was replaced by Joseph in the lineup, and Melvin said a roster replacement would arrive Thursday. Davis is expected back against the Yankees this weekend in New York.

Chris Bassitt (9-5, 3.59 ERA) starts for the A's and fellow right-hander Glenn Sparkman (3-9, 5.52) is on the hill for the Royals as the clubs wrap up their four-game series with a Thursday matinee.