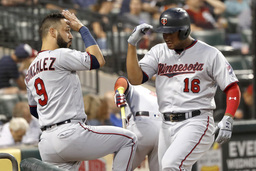 CHICAGO (AP) About the only thing Jonathan Schoop hasn't done lately is get steady playing time.

That could change if he stays this hot at the plate.

The 27-year-old Schoop has five homers in his last five starts, a streak that goes back to Aug. 16. During that span, he didn't get off the bench in six other games.

"I just try to go to the cage and stay fresh, hit the gym and make the body stronger," he said. "When I see my name in the lineup, I just go out there and enjoy the game and play hard.

"I hope I can keep it up. I feel really good right now."

It was the 13th multihomer game of Schoop's career and fifth this year. He has 21 home runs on the season to become the seventh Minnesota player with at least 20, tying a major league record.

The feat had been done by seven previous teams, most recently the 2018 Dodgers. The Twins can claim the record outright if Jorge Polanco - who has 19 - hits another homer.

Max Kepler, who leads the Twins with 35 homers, was scratched from the lineup because of right knee soreness and third baseman Miguel Sano left after the sixth inning with right forearm tightness after being hit by a pitch.

Minnesota manager Rocco Baldelli said both players are fine and might play in the series finale Thursday afternoon.

Jose Abreu and Matt Skole each drove a run for Chicago.

Jake Odorizzi (14-6) allowed two runs and five hits in six effective innings. He walked two and struck out eight. The right-hander had dropped his last start to the White Sox on Aug. 21 in Minnesota, allowing four runs (three earned) and eight hits in five innings.

Abreu gave the White Sox a 1-0 lead with an RBI double in the first.

Minnesota then took advantage of a Chicago miscue to score three runs in the second. Eddie Rosario led off with a popup to shallow center. Shortstop Tim Anderson called off center fielder Leury Garcia, but let the ball glance off his glove for a gift single.

One out later, C.J. Cron appeared to hit a two-run shot, but Garcia raced back to the wall, jumped and reached over the fence to bring back a potential homer. That would have been the third out if not for Anderson's mistake. The Twins took advantage. Ehire Adrianza singled and Schoop followed with a long three-run shot to left.

"You've got to play clean baseball, and if you're going against a club that has the ability to string together a lot of different things in terms of generating runs, you can't let them in," White Sox manager Rick Renteria said. "This is not indicative of the way we've been playing all year."

Minnesota stretched the lead to 5-1 in the third. Rosario drove in the first run with a fielder's choice groundout and Sano followed with a sharp grounder that Anderson booted for an error as another run scored.

Skole drove in a run with a groundout in the fourth to make it 5-2.

Schoop's solo shot in the eighth made it 6-2. Garver added a two-run drive later in the inning.

Schoop said Twins players were aware of tying the homer record. Now all eyes are on Polanco to join the 20-homer club.

"Polanco's a good hitter, so he's gonna get it," Schoop said.

Twins: CF Byron Buxton (left shoulder) rejoined the team. His rehab stint with Class A Cedar Rapids was halted after two at-bats Sunday because of discomfort in his shoulder. An MRI on Tuesday revealed no structural damage, and Buxton will be evaluated by the Minnesota medical staff over the next couple of days. "You know when you don't feel right swinging," he said. "The best decision was to take a step back and take a couple of days and come up here."

Twins RHP Jose Berrios (10-7, 3.53 ERA) starts the series finale Thursday afternoon looking to avoid a winless August. He is 0-2 with an ERA of 8.44 in four starts this month. Chicago rookie RHP Dylan Cease (3-6, 5.76) looks to win a second straight start after striking out a career-high nine against Texas last week.