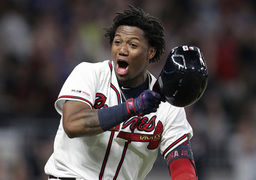 ATLANTA (AP) Ronald Acuna Jr. has found multiple ways to beat the Miami Marlins this year. He only wishes the season series wasn't over.

"Yeah, I definitely think it was an appropriate way and a fitting ending to the way we played the Marlins," he said through a translator. "But I would have much rather hit a home run against them."

Acuna hit an RBI single with two outs in the ninth inning and the Atlanta Braves won their fifth straight game, finishing off the Marlins 3-2 on Thursday night.

Freddie Freeman hit a tying homer in the eighth and the Braves sent Miami to its 12th road loss in a row, the longest streak in the majors this year.

The NL East-leading Braves went 15-4 against the Marlins this year. Acuna hit .319 with nine homers and 18 RBIs in the season series.

"More so I just wanted to leave it on the field and walk it off," Acuna said. "I wanted us to get the win. I really didn't care independently about which ballplayer did it."

Adeiny Hechavarria opened the Atlanta ninth with a double and later scored on Acuna's single off Ryne Stanek (0-3).

Freeman's 34th homer, an opposite-field drive to left, came off Stanek, who lost his first decision since being acquired from Tampa Bay. Stanek threw a fastball down and away to Freeman.

"I didn't think it was that bad of a pitch," Stanek said. "He just put a good swing on it."

Mark Melancon (5-2) faced four batters in the ninth to earn the win.

Braves starter Mike Soroka hasn't won a decision in seven straight starts. The 22-year-old All-Star was still hard to solve, allowing a single in the second and another in the sixth before Brian Anderson and Neil Walker singled in the seventh and both scored to make it 2-1 on Starlin Castro's double.

Soroka, tied for the second-best ERA in the majors at 2.41, allowed no walks and struck out five in seven innings. It marked the fourth time in five starts that he's pitched that deep into a game.

"It's affirmation to me that I'm not really taking the foot off the pedal," Soroka said. "Staying aggressive and keeping with what's working, too."

Alcantara took a shutout into the eighth inning of his last start against Atlanta on Aug. 10.

Fifteen of Freeman's homers have either tied the game or given Atlanta the lead this season. ... Freeman became the first Brave since Chipper Jones in 2007 to have a season with 100 RBIs and 100 runs scored. ... Atlanta improved to a season-best 25 games over .500.

Marlins 1B Walker snared Rafael Ortega's liner in the second to double up Hechavarria and prevent a runner from scoring from third.

Miami has allowed a homer in 23 straight games, the fourth-longest streak in major league history and three off the mark shared by Baltimore in 2017, Seattle in 2004 and Houston in 2001.

Braves: SS Dansby Swanson (right foot contusion) was 1 for 2 with an RBI through the first four innings of his first rehab game at Single-A Rome on Thursday. ... LF Austin Riley (right knee sprain) ran without pain before the game and will report to Rome on Friday.

Braves: RHP Mike Foltynewicz (4-5, 6.09 ERA) will pitch the first game of a three-game series at the New York Mets. Foltynewicz has a 19.96 ERA and opponents are hitting .344 against him with runners in scoring position.