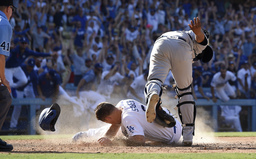 LOS ANGELES (AP) Although Max Muncy's 18th-inning homer in last year's World Series was one of the most memorable walk-off hits in Dodgers history, he had somehow never come through to end a regular season game for Los Angeles.

After grinding through an eight-pitch at-bat against the San Diego Padres' All-Star closer, Muncy added himself to the list of late-game stars in the Dodgers' season-long series of dramatic finishes.

Muncy's fourth hit was a two-run, walk-off double, and the Dodgers rallied from a late three-run deficit for a wild 11-10 victory over San Diego on Sunday.

Muncy had a homer and two doubles while driving in three runs, while four Dodgers added two RBIs apiece as the NL West leaders took three of four from San Diego with a huge comeback at Chavez Ravine. With its ninth walk-off win already this season, Los Angeles (74-40) also remained on top of the overall major league standings.

"It never gets old," Muncy said of the Dodgers' latest walk-off celebration. "I don't think it ever will. ... We were grinding out there. We're all trying to pick each other up, and we came through together."

San Diego went up 10-7 in the eighth, but the Dodgers scored twice in the bottom half. Kirby Yates (0-3) ended that rally only by retiring electric Dodgers rookie Will Smith on a lineout.

Joc Pederson led off the ninth with a double, ending his 0-for-24 skid. After Pederson was thrown out trying to go to third on Alex Verdugo's grounder to first, Corey Seager reached base when Luis Urias booted his potential game-ending, double play grounder to second.

Muncy then punched a drive down the right field line, and Seager easily slid in ahead of the off-target relay throw.

"Don't leave early," Verdugo said. "We can do something special at any moment. This offense can put a crooked number anytime."

Eric Hosmer hit a grand slam and drove in five runs, while Francisco Mejia had three hits and Manuel Margot homered in San Diego's 11th loss in 16 games. Every starter got at least one hit, but the Padres still managed to lose in their highest-scoring performance since June 29.

"It's a tough loss, there's no other way to slice it," Padres manager Andy Green said. "Some really good things happened in the game from the offensive perspective. ... A lot of positive things. Definitely a tough way to lose."

"Seager is not the fastest runner," Green said. "Whether you can turn that one or not, you don't know, but you get an out there. Guys are giving effort. Just weren't able to make the play."

A.J. Pollock had a homer and an RBI double, and Russell Martin also homered for the NL-leading Dodgers, who have won five of six overall after taking three of four from San Diego.

Hosmer hit his second career grand slam off Maeda, who yielded five hits and five runs over 2 2/3 innings in his shortest start of the season. The Padres' $144 million slugger previously had homered in just one game since June.

Rookie Chris Paddack had an early RBI single for San Diego, but gave up six runs and six hits while failing to record an out in the fifth inning of the second-shortest start of his career.

The Dodgers are practically the only team hitting well against the promising right-hander: Paddack has given up nine earned runs in 14 1/3 innings over three starts against Los Angeles for a 5.65 ERA - more than double his overall 2.78 ERA entering the game.

Padres: LF Josh Naylor was pulled by Green in the sixth after bruising his knee with a foul ball. "He was giving everything he had out there," Green said. "Just wasn't able to move. He didn't ask to come out."

Dodgers: Enrique Hernandez (sprained left hand) and Chris Taylor (broken left forearm) are taking dry swings, and both could begin rehab assignments within the next week. Hernandez has been out since July 24, and Taylor hasn't played since July 14. ... 1B David Freese might not return from his left hamstring strain until September, manager Dave Roberts said. ... RHP Ross Stripling is expected to get a two-inning rehab assignment Tuesday in his comeback from various injuries.

Padres: After a day off, Dinelson Lamet (0-2, 5.09 ERA) makes the sixth start of his comeback season when they visit Seattle on Tuesday.