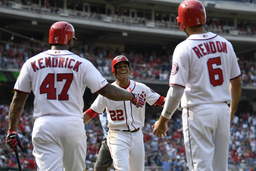 WASHINGTON (AP) Stephen Strasburg was too tough, even for the top team in the majors.

The Washington ace tossed seven masterful innings Sunday to win his seventh consecutive start, leading the Nationals to an 11-4 rout of the Los Angeles Dodgers.

"Everything about him this year has been amazing," manager Dave Martinez said. "The way he works. His attitude. He's having fun. I just watched him dance. It was kind of nice."

Martinez watched most of Strasburg's latest gem from the clubhouse after he and outfielder Adam Eaton were ejected for arguing a called strike in the first inning.

Strasburg (14-4) took over the major league lead in wins after striking out nine, walking none and limiting a potent Dodgers lineup to one run and two hits. He threw 67 of 100 pitches for strikes.

"He's been everything you can imagine one of your star pitchers to be," Martinez said.

Brian Dozier and Juan Soto homered, while Anthony Rendon continued to swing a productive bat with three hits and four RBIs that helped the Nationals (56-49) prevent a three-game sweep by the major league-leading Dodgers (69-38).

Corey Seager hit a three-run homer with two outs in the ninth off Nationals reliever Michael Blazek to help the Dodgers avoid their most lopsided loss of the season.

Strasburg was perfect through 4 1/3 innings before Los Angeles got to him. A.J. Pollock doubled into the left field corner and scored when Matt Beaty doubled down the right field line.

The Nationals quickly answered in the bottom half against All-Star Walker Buehler (9-2).

Gerardo Parra reached on an infield hit before Dozier hit his 15th home run a few rows over the tall wall in right-center.

Victor Robles, pressed into service on a scheduled day off after Eaton was ejected, extended the fifth-inning rally with a triple, which was the first of his three hits. Robles then scored on a single by Rendon, who has a hit in 16 of his last 18 games.

Strasburg helped his own cause in a four-run sixth by poking a bases-loaded single into right field to score Howie Kendrick. Strasburg has driven in six runs since July 18 after posting just one RBI up to that point this season.

Buehler lost for the first time since May 18. He allowed seven runs (four earned) and eight hits over 5 1/3 innings on his 25th birthday.

"I just didn't execute enough," Buehler said. "I got myself in bad counts and made some pitches that got too much of the plate."

Soto launched his 18th homer as part of a four-run ninth for the Nationals.

Eaton was ejected for the third time in his career and first since 2016. He thought he had drawn a one-out walk and was a third of the way down the first base line after flipping his bat before he was summoned back into the box by plate umpire Jeremie Rehak.

Eaton struck out swinging on the next pitch and, after saying something to Rehak on his way back to the dugout, was tossed. Eaton then got into the face of the umpire, which prompted Martinez to race out of the dugout, shove his outfielder aside and plead his case.

"I don't like arguing about balls and strikes. But I am going to go protect my players," Martinez said. "Adam turned around. That's what really ignited everything. He was walking away, and (Rehak) started coming after him. That was my cue."

Martinez was ejected for the third time this season and fourth in his career, but not before making a demonstrative display on his way off the field.

"After a while, you know, enough is enough," Martinez said.

The 33-year-old Negron played in nine games with the Mariners this season, batting .227 (5 for 22) with three runs and one RBI. He has played parts of six big league seasons for Cincinnati, Arizona and Seattle, batting .216 batting with seven homers and 25 RBIs. A California native, Negron has played seven positions in his big league career.

Dodgers: Valuable utilityman Kike Hernandez (left wrist) will likely be placed on the injured list Monday, according to manager Dave Roberts. "He's still in pain. It's getting better, but the IL is probably inevitable," Roberts said.

Nationals: RHP Max Scherzer felt "ornery" and "a little frustrated" after an MRI revealed a mid-back strain Friday, according to Martinez. Scherzer is scheduled start Tuesday against Atlanta, but Martinez said it was unlikely that he will. "I want to make sure that he is 100 percent," Martinez said. "We need Max to be 100 percent to get us through the next few months. He's got to prove to us that he is that." ... 1B Matt Adams had a sore right foot after getting hit by a pitch in the second inning. He stayed in the game to run the bases before getting tagged out at home. Martinez said swelling in Adams' foot made it hard to read the X-rays. Adams will undergo another round of X-rays Monday.

Dodgers: RHP Kenta Maeda (7-7, 3.81 ERA) looks for his first win since May 31 when the Dodgers open a three-game series Monday night in Colorado.

Nationals: LHP Patrick Corbin (8-5, 3.25) seeks his sixth win in 11 starts at Nationals Park this season against the NL East-leading Atlanta Braves on Monday night. Corbin ranks second in the majors with a 1.68 ERA at home.