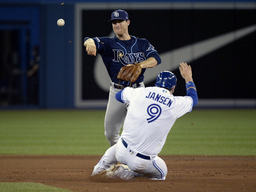 To remain in contention, the Rays will need more pitching performances like the one they got from Ryan Yarbrough on Friday night.

The Rays began the day a half-game behind Oakland for the second AL wild card.

After opener Diego Castillo worked a 1-2-3 first, Yarbrough (9-3) allowed one run and four hits in 5 1/3 innings of relief. The left-hander walked one and struck out four.

Yarbrough has a 1.10 ERA in his past seven games.

"He was cruising," Rays outfielder Tommy Pham said. "The tempo was great, man. He was getting us back into the dugout real quick. That's everything you want from your pitcher."

Yarbrough said he and his fellow hurlers are ready for the challenge of stepping up in Snell's absence. The reigning AL Cy Young Award winner is expected to be out until September.

"We really believe in what we have on this pitching staff," Yarbrough said. "I know he was a big part of it, but there's a lot of other guys who really made us one of the best pitching staffs in the league. Everyone just has to step up, myself included. We kind of saw that tonight."

The Rays, who had lost seven of nine, won back-to-back games for the first time since a three-game streak from July 13-15. Tampa Bay is 6-1 against Toronto this season.

The Blue Jays, held to one hit by Cleveland starter Shane Bieber on Wednesday, managed four against four Rays pitchers. Three of them came consecutively in the fourth.

Tampa Bay opened the scoring in the third on a two-out triple by Austin Meadows.

The Blue Jays tied it in the fourth but believed they should have taken the lead. Toronto had runners at first and second with two outs when Freddy Galvis hit a ball toward the left field corner. The ball bounced off the wall in foul territory and back toward left fielder Pham, who accidentally knocked it into the stands with his glove.

Blue Jays manager Charlie Montoyo argued that Randal Grichuk, who had been at first base, should score. Umpires reviewed the play and gave Grichuk only two bases from where he was at the time of the pitch on a batted ball deflected out of play.

"The correct ruling was that a ball not in flight was subsequently deflected out of play," crew chief and plate umpire Jerry Meals told a pool reporter. "At that point, the reward is two bases from the time of the pitch."

Toronto had already used its challenge on Pham's steal of second base in the first.

"We didn't have any more replays but they were nice enough to go check with New York," Montoyo said. "According to what Jerry Meals said, they made the right call."

The threat ended when Yarbrough got Danny Jansen to fly out.

The Rays took the lead on d'Arnaud's two-out single in the fifth. The former Blue Jays farmhand has 18 RBIs in 16 games this month.

Rays: Tampa Bay filled Snell's roster spot by recalling C Michael Hernandez from Triple-A Durham. ... OF Kevin Kiermaier (left thumb) took swings and will start at DH for Class A Charlotte on Saturday. Kiermaier is expected to rejoin the Rays on or soon after his eligible return date, July 31. ... RHP Ryne Stanek (right hip) will throw a bullpen Saturday or Sunday. Stanek last pitched on July 19.

Blue Jays: INF Eric Sogard was held out of the starting lineup.

Toronto has scored three runs or fewer in five straight games, matching its longest such streak of the season.

Rays: Cash said LHP Jalen Beeks (5-1, 3.69 ERA) will be "a significant factor" in Saturday's game, following opener RHP Andrew Kittredge. Saturday would have been Snell's next turn in the rotation.

Blue Jays: LHP Ryan Borucki (0-1, 3.86) makes his second start after missing the first 101 games of the season because of a sore elbow. Borucki allowed four runs, two earned, in 4 2/3 innings against Cleveland on Monday.