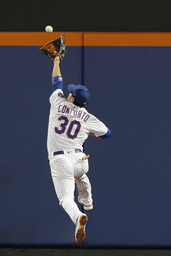 NEW YORK (AP) The San Diego Padres have been linked to Noah Syndergaard in trade talks for the better part of a year. Who knows if there's a deal to be made, but there's little doubt the New York Mets would love to have some of the relievers the Padres rolled out at Citi Field on Wednesday night.

Matt Strahm, the first of four Padres relievers, struck out four over two perfect innings to earn the win as San Diego received five scoreless innings from its bullpen in a 7-2 victory over the Mets.

The relief outing was the longest of the season for Strahm (4-7), who made his first 15 appearances as a starter before moving to the bullpen following the All-Star break. Strahm made five starts and 36 relief appearances last year, his first with the Padres.

"You can see him in the fifth and the sixth, you can turn around and see him in the eighth the next day," Padres manager Andy Green said. "He can pitch just about anywhere for us. Great bridge piece for us today."

Strahm isn't the only pitcher who can handle length in relief for the Padres, who also have former starters Cal Quantrill, Logan Allen and Luis Perdomo in the bullpen as they take give rotation auditions to Adrian Morejon and Dinelson Lamet.

The latter started and allowed two runs while throwing 80 pitches over four innings in his fourth start since returning from Tommy John surgery.

"To go out there and give up two runs and then turn it over to `Strahmy' and the rest of the guys, that's a good recipe for a win there," Padres catcher Austin Hedges said.

Quantrill threw 6 2/3 scoreless innings of relief to earn the win against the Chicago Cubs on Sunday. After Craig Stammen escaped a bases-loaded jam in the seventh and Andres Munoz worked around a walk in the eighth, Perdomo tossed a hitless ninth and has thrown 3 1/3 scoreless innings over his last two appearances.

Over the last seven games, Padres relievers have posted a 1.27 ERA.

"We do have some weapons now, kind of the way our bullpen's been reconstructed," Green said. "Those choices we're going to have in the fifth, sixth inning sometimes are going to be good choices."

The Mets, on the other hand, have very few choices once the starter exits the game.

Syndergaard (7-5) allowed three earned over seven innings and retired 10 of the final 11 batters he faced before former New York closer Jeurys Familia gave up two runs while recording just one out in the eighth.

"We've got to keep on pitching him," Mets manager Mickey Callaway said. "We've got to pick situations where we think he's going to succeed, bottom of the lineup when you're down like tonight, and stick with it."

The Mets wobbled Lamet in the first, when Jeff McNeil hit a leadoff double and scored on Michael Conforto's single. Lamet retired Amed Rosario on a flyball with the bases loaded to end the inning.

Hedges tied the game with an RBI single in the second before the Padres scored three times in the third, when they were helped by a pair of one-out walks by Syndergaard and two misplays in left field by Dominic Smith with two outs.

After Eric Hosmer's sacrifice fly gave the Padres the lead for good, Hunter Renfroe hit an RBI single and went to second on Smith's first error. Franmil Reyes followed with a run-scoring double and took third when Smith's throw sailed off the glove of Rosario at shortstop

Conforto doubled in the third on scored on Robinson Cano's groundout.

The Padres added insurance runs in the eighth when Hedges doubled home a run and Fernando Tatis Jr., who had three hits, had an RBI single. Renfroe had a sacrifice fly in the ninth.

McNeil celebrated the first anniversary of his big league callup by going 1 for 3. McNeil, who debuted against the Padres and singled in his only at-bat at Citi Field, is batting a major league-leading .342 this season and is hitting .337 with 57 extra-base hits in his first 150 games. He appeared in the All-Star Game earlier this month.

"You saw what happened the last two months of last season, you're like man, that was really good," Callaway said. "You go into the season going, OK, hopefully he can do something close to what he was doing. And he's eclipsed all of that.

"He continues to do it and you don't see many weeks where he hasn't done it on a consistent basis," Callaway said.

Padres: OF Travis Jankowski went 1 for 5 Tuesday night for Triple-A El Paso. He missed the first 99 games of the season with a broken left wrist before he was activated from the injured list and optioned on Monday.

Mets: RHP Zack Wheeler (right shoulder) felt fine after throwing off the mound Tuesday and is slated to come off the injured list to start Friday night against the Pirates.