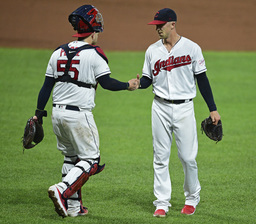 Castellanos hit a grounder up the middle off Tyler Clippard for the only hit allowed by Cleveland in an 8-0 victory over the Detroit Tigers on Tuesday night. It was the second one-hitter tossed by the Indians this season.

Detroit managed just two baserunners and sent 28 batters to the plate - one above the minimum - against Plesac, Clippard, Nick Goody and Tyler Olson. Victor Reyes began the game with a walk, but was immediately erased by Plesac's MLB-leading fifth pickoff.

"I'm stoked and really happy for everyone right now," said Goody, who struck out five working the sixth and seventh innings. "Plesac was throwing unbelievably, and (Tyler) Clippard and Tyler Olson came in and were both great. We're all just doing our job and doing all we can for our team."

Cleveland bolted to a 7-0 lead through three innings before the game was halted by rain for 2 hours, 7 minutes. Rookie Oscar Mercado hit a two-run homer and Francisco Lindor doubled-in a pair during a five-run second off Tigers left-hander Ryan Carpenter (1-6).

Tyler Naquin added a solo homer and Jordan Luplow doubled twice for the Indians, who have won nine straight against Detroit and pulled within five games of first-place Minnesota in the Central Division.

"A one-hitter on a night like this, that's incredible," Naquin said. "Plesac is always giving us a chance and Clip was ready to go, doing his thing. Then Goody is always doing it and Oly came in and shut the door."

Plesac exited after the lengthy delay and was followed by Clippard, Goody and Olson, who pitched two innings apiece.

Though Goody (1-0) was Cleveland's third pitcher, he was awarded his first victory since June 17, 2017, by the official scorer.

"I had no idea I got the win until my wife texted me," he said. "Clippard was right next to me and he started laughing about it. I didn't care who got the credit, I'm just happy we won the game."

Carpenter allowed seven earned runs on seven hits and committed an error in three innings. He was promoted from Triple-A Toledo earlier in the day, then sent back to the Mud Hens following the game.

Detroit, which hasn't posted back-to-back wins since May 28-31, fell to 1-10 against the Indians this season.

"I don't want these guys feeling sorry for themselves, wondering why it happens to us all the time," Tigers manager Ron Gardenhire said. "You've got to grow from this and keep playing. That's a long night, though, a very long night."

Indians 1B Bobby Bradley - an upper-tier prospect - was optioned to Triple-A Columbus. Bradley, who led the International League with 24 home runs when recalled, batted .178 with one homer and four RBIs in 15 games. He struck out 20 times in 45 at-bats. "We all see the potential," manager Terry Francona said. "There is some sock in that bat, for sure. He's going to be a good power hitter at this level."

Indians RHP Danny Salazar, who has not pitched in the majors in two years because of chronic shoulder problems, made his second rehab appearance for Double-A Akron. Salazar worked three innings Tuesday, striking out four while allowing one run at Erie. The 2016 AL All-Star has a 3.18 ERA over 5 2/3 innings with the RubberDucks.

Tigers: 2B Josh Harrison (left hamstring strain) experienced a setback while working out, delaying plans for him to begin a rehabilitation assignment. He has been on the 10-day injured list since May 28.

Indians: RHP Corey Kluber (right ulna fracture), who is on the 60-day IL, will throw 20 fastballs Wednesday in his initial bullpen session since being struck on the arm by a line drive May 1 in Miami.

Tigers: RHP Spencer Turnbull (3-8, 3.59 ERA) has lost all three of his starts against Cleveland this season, allowing 11 earned runs in 14 innings.