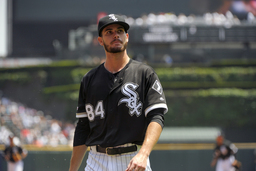 CHICAGO (AP) The Chicago White Sox keep sending signals that they're getting ready for a big turnaround after years of losing.

Consider what happened Wednesday another loud one. Dylan Cease made a winning debut in the opener of a doubleheader and Jose Abreu ended the second game with a home run.

The Cuban slugger hit a three-run drive in the 12th inning, Yoan Moncada and Ryan Cordell each went deep twice and the White Sox beat the Detroit Tigers 9-6 in the nightcap.

Abreu's shot to the left-field bullpen capped a wild win for the White Sox, after Cease went five innings in his first appearance to lead them to a 7-5 victory.

Chicago had runners on first and second in the 12th after Nick Ramirez (3-3) walked Zack Collins with one out and Leury Garcia singled. Moncada struck out before Abreu connected on a 3-2 pitch, sending the White Sox to their fifth win in six games.

His only other game-ending homer was against Tampa Bay on April 25, 2014. The three-time All-Star is 12 for 25 over his past six games.

"We're going to be good, man," Abreu, who has an expiring contract, said through an interpreter. "We see Cease today, what he did in his first outing. Yoan's been doing it through the whole season and he's going to get better. Eloy (Jimenez), he's going to get better, too. We have a lot of talent here, with young guys. That's something that made me realize I'm very blessed being here and being in this organization. I want to be part of this organization going forward because I know that we're going to be very, very good. I think that you can see that right now."

Moncada hit a solo homer to left in the first off Tyler Alexander and tied it with a 462-foot shot to right against All-Star closer Shane Greene in the 10th after John Hicks hit an RBI single in the top half. He also capped a three-run seventh with a sacrifice fly against Jose Cisnero that made it 5-all.

Cordell went deep leading off the fifth against Chicago native Tyler Alexander and cut it to 5-4 in the seventh with a two-run shot against Victor Alcantara for his first career multi-homer game. He also made a leaping catch against the center-field wall to rob Harold Castro in the fourth.

Nicholas Castellanos hit a two-run homer for Detroit. Alexander went five innings in his major league debut, allowing two runs and five hits. But the Tigers lost for the 11th time in 12 games.

"Those guys gave about everything they had tonight," manager Ron Gardenhire said. "They were spinning on empty, and I'm sure the other guys were, too. Tough night, but I'm proud of the way these guys played."

There was a charged atmosphere for the first game with Cease making his debut. The 23-year-old right-hander gave up three runs and four hits. He struck out six and walked four - three during a two-run first in which he also hit a batter.

But Cease (1-0) also showed the stuff that had the White Sox anticipating big things when they acquired him along with Jimenez as part of the trade in July 2017 that sent Jose Quintana to the crosstown Cubs. He had a roaring crowd, not to mention 15 to 20 family members, cheering him on.

"It really is hard to put into words, the atmosphere," Cease said. "It's definitely the most fun I've had on a baseball field."

Abreu went 2 for 4 with a double and a run. James McCann added an RBI double and run-scoring single, and Ryan Cordell drove in two.

Kelvin Herrera gave up an RBI double to Gordon Beckham with two outs in the ninth. Alex Colome then gave up a run-scoring double to Christin Stewart before retiring Castellanos for his 19th save in 20 chances.

Norris (2-8) is 0-7 in his past 10 starts after getting tagged for six runs and eight hits in five-plus innings.

Jeimer Candelario homered for Detroit after getting hit in the wrist area earlier in the game.

Tigers: CF JaCoby Jones (back spasms) is headed to the injured list after exiting the first game in the fifth inning. Gardenhire said an MRI showed no structural damage. ... SS Jordy Mercer went 0 for 3 in the opener after being sidelined since May 7 with a strained right quad.

Tigers: LHP Matthew Boyd (5-6, 3.72 ERA) gets the ball after having his scheduled start pushed because two days because of Tuesday's postponement due to rain. He is 0-2 in his past five starts - all losses for the Tigers.