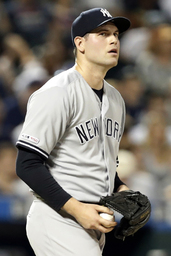 NEW YORK (AP) All night long, Michael Conforto had chances to come through. Once he finally did, the New York Mets were riding high at Citi Field.

Conforto busted out of his slump in a big way, hitting a two-run double that snapped an eighth-inning tie and lifted the Mets over the New York Yankees 4-2 on Tuesday.

"It felt great. Definitely, that's a good way to break out, for sure," Conforto said. "Anytime you can change the game with a big hit, especially in a Subway Series, it's going to feel good."

On the other side of the city rivalry, the Yankees failed to homer for the first time in 32 games - ending their major league-record streak.

J.D. Davis did homer and also delivered a tying double to help the Mets rally from behind in the eighth for the second consecutive game. They scored five times in their final turn at bat Sunday night to beat the Braves, ending a seven-game slide.

"We're never out of the fight. We always come back, especially late in the game," Davis said.

A tough error on third baseman DJ LeMahieu helped the fourth-place Mets (39-47) take down another division leader after they were stymied by James Paxton for six innings. General manager Brodie Van Wagenen watched the first 4 1/2 innings from the center field bleachers with the 7 Line Army of orange-clad Mets fans.

Back from London, where they won two slugfests against the rival Red Sox last weekend, the Yankees had their five-game winning streak stopped and lost for only the second time in their past 15.

"Our bullpen's been fantastic. They've been unreal all year long," Paxton said. "We're going to lose some games late sometimes. It doesn't happen very often with the guys we have out there."

Seth Lugo (4-2) worked a hitless eighth and Edwin Diaz earned his 18th save in 22 attempts. With a runner aboard, catcher Wilson Ramos corralled Brett Gardner's foul tip for a game-ending strikeout after a couple of bobbles off his mitt and bare hand.

A disappointed Gardner gave Ramos a quick pat on the back as he headed for the mound to celebrate.

Potential trade chip Zack Wheeler struck out eight over 6 1/3 solid innings for the Mets, who split a doubleheader at Yankee Stadium last month following a rainout. The crosstown combatants play for the final time this season Wednesday night.

"My mind's right here right now. So, trying to help this team win and that's all I'm worried about. The rest will take care of itself," Wheeler said. "This win is big for us. ... Hopefully, we can start rolling and get back in it."

The Mets trailed 2-0 before Davis hit a leadoff homer against Paxton in the sixth. Davis tied it with an RBI double to center field off Adam Ottavino (3-3) in the eighth, just beyond a diving Aaron Hicks - who was shaded well over toward right-center.

With the bases loaded and one out, Zack Britton entered for a lefty-lefty matchup with Conforto, who drove the first pitch to deep left field and short-hopped the wall.

"We just really didn't get the job done," Britton said. "Conforto right there - very rarely does he swing first pitch on our charts. So, tried to steal a strike right there, bases loaded, and then go after him. But, give him credit. He took the best pitch I probably was going to throw him and hit it hard into the gap."

That snapped a 1-for-24 skid for a fired-up Conforto, who pumped his arms and gestured toward the Mets bench.

"We know this guy can hit, and that's the one at-bat that it probably takes for him to just start going off like Michael Conforto can for a while," Mets manager Mickey Callaway said.

Earlier in the game, Conforto grounded into a pair of inning-ending double plays with two on.

"Honestly, just a little frustrated," he said. "But that's why we play nine innings, and I knew I was going to get another shot at the end of the game."

Gleyber Torres had an RBI single for the Yankees in the second, and Paxton got his first career RBI with a well-executed safety squeeze.

As the international signing period opened, the Yankees inked highly touted 16-year-old Jasson Dominguez, a switch-hitting center fielder from the Dominican Republic, for a record $5.1 million signing bonus - nearly all that was available in their bonus pool. "He is an elite-level athlete. He has elite baseball tools," Director of International Scouting Donny Rowland said on a conference call. "He's the kind of player that kind of makes the hair on your arm stand up when you watch him." Rowland said it was "an easy decision" to go "all in" on Dominguez, already nicknamed The Martian for his out-of-this-world ability at his age. "Every now and then the right player comes along," Rowland said. "This one's worth it."

In a pregame video tribute, the Mets congratulated Yankees pitcher CC Sabathia on "an outstanding career." Sabathia plans to retire after this season.

Yankees: 1B Luke Voit was placed on the 10-day injured list, retroactive to Sunday, after straining his abdomen in London. The team thinks Voit can return against Toronto during the weekend right after the All-Star break. ... Yankees catcher Gary Sanchez was in the cleanup spot after exiting Sunday's game with a jammed left thumb.

Yankees RHP Domingo German (9-2, 3.86 ERA) comes off the injured list to start the series finale against LHP Jason Vargas (3-3, 3.66), who won at Yankee Stadium last month to improve to 1-7 with a 6.59 ERA against the Bronx Bombers. German has been sidelined since June 8 with a strained left hip flexor.