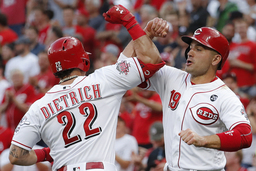 Jesse Winker and Derek Dietrich homered off Verlander in the first inning Tuesday night, and the Reds held on for a 4-3 victory over the Houston Astros that clinched their first series win in nearly a month.

By taking the first two games, the Reds won a series for the first time since May 24-26, when they took two of three from the Cubs. The Astros hadn't dropped a series since April 29-May 2.

"The results are great," manager David Bell said. "We've talked about getting on a streak, but we've been playing good teams. We're raising our level of expectations to do what it takes to win games."

The homer made the difference, as the Reds hit three off Verlander (9-3) for all their runs.

The Reds quickly got to Verlander, who hadn't allowed a pair of homers in one inning all season. Winker connected on Verlander's fourth pitch, the third leadoff homer allowed by the right-hander this season. Joey Votto's double and Dietrich's first homer since May 28 made it 3-0.

"Picking up a three-spot is always good, no matter who you're facing, but especially against a pitcher like Verlander, where there's no room for error," Reds starter Anthony DeSclafani said.

Kyle Farmer added a homer in the seventh off Verlander, who has given up three homers in each of his last two starts. Verlander went seven innings and struck out eight.

"Maybe I could throw less strikes, but I'm someone who traditionally wants to attack the (strike) zone and not let too many guys on base, so I kind of live and die by that," Verlander said.

Asked what he could do to cut down on homers, Verlander said, "Invent a sinker? I don't know."

DeSclafani (4-3) pitched into the sixth inning and remained unbeaten in June. He gave up six hits, including Yordan Alvarez's RBI double with one out in the sixth that cut it to 3-1 and ended his outing. Alex Bregman hit a two-run homer in the eighth off Amir Garrett.

Closer Raisel Iglesias was used in a setup role again, fanning two in the eighth. Michael Lorenzen retired the side in order in the ninth for his second straight save and fourth overall.

Verlander passed Mickey Lolich for 19th place on the career strikeout list with 2,839. Up next is Jim Bunning at 2,855.

The start of the game was delayed 28 minutes because of storms in the area. There was a 52-minute storm delay in Monday's game.

Votto had a pair of doubles for the first time since June 17 last season at Pittsburgh. Votto has 385 career doubles, four shy of Davey Concepcion for third place on the Reds list. Pete Rose had 601 and Barry Larkin had 441.

Reds: Tyler Mahle (2-7) is coming off his shortest stint of the season, 4 1/3 innings of a 7-2 loss to Texas on Friday. He complained afterward about getting removed from games too quickly.