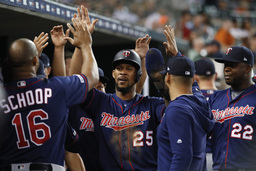 DETROIT (AP) Not much can contain the Twins power hitters right now, not even spacious Comerica Park.

On pace to become the majors' first-ever 300-homer club, Minnesota hit three more in a 6-3 win over the Detroit Tigers on Friday night.

Mitch Garver, C.J. Cron and Nelson Cruz went deep for Minnesota while Marwin Gonzalez had four hits. The Twins have won 17 of 22 and are 6-1 against the Tigers this season.

"We've got a huge, impact team and you never know who is going to contribute each night," Garver said. "That makes us dangerous."

The game was tied after seven innings, but the Twins scored twice in the eighth and once in the ninth.

"That was a hard-fought game - nothing was coming easy for either side," Twins manager Rocco Baldelli said. "(Matthew) Boyd is developing into one of the better pitchers in baseball, and we had to battle him."

Ryne Harper (1-0) got his first career win after striking out the side in the seventh inning.

"That's really cool," Baldelli said. "There have been a lot of firsts for him this year, and he's earned every one of them."

Blake Parker pitched the ninth for his ninth save.

Joe Jimenez (2-4) took the loss, allowing two runs in the eighth inning. Jimenez is 3-7 with a 6.40 ERA since pitching in last year's All-Star Game.

"No one is more frustrated than Joe," said Tigers bench coach Steve Liddle, who replaced Ron Gardenhire after an early ejection. "He was an All-Star a year ago at this time, and now he has to find a way to grow from this and get back to that level."

Michael Pineda, activated from the injured list before the game, pitched five innings and allowed three runs and eight hits.

Boyd allowed three runs and nine hits in seven innings. He struck out eight with no walks but allowed two homers.

"That team is leading the league in homers, so you know they are going to punish your mistakes," Boyd said. "They swing early and often, and I was able to take advantage, but they got me a couple times."

The Tigers took the lead on Brandon Dixon's first-inning sacrifice fly, but the Twins scored twice in the third.

Byron Buxton singled and moved to second when Boyd was called for a balk. Gardenhire was ejected after arguing the call, then Boyd allowed a two-run, two-out homer to Garver.

Detroit tied it in the fourth on doubles by Miguel Cabrera and Ronny Rodriguez, and Castellanos made it 3-2 with an RBI single in the fifth.

Cron's 14th homer made it 3-3 in the sixth, and the Twins jumped ahead against Jimenez in the eighth.

Cruz led off the inning with his ninth homer, and after Eddie Rosario lined out, Cron doubled and Gonzalez followed with his fourth hit, an RBI single that gave the Twins a 5-3 lead.

The Tigers had the tying runs in scoring position with two out in the eighth, but Dawel Lugo grounded out to pitcher Tyler Duffey.

Garver added an RBI single in the ninth.

Cabrera is one of baseball's slowest runners, thanks to chronic knee problems, but he grabbed an extra base in the fourth. After a leadoff double, Cabrera took off on Dixon's fly to right-center and narrowly beat a startled Buxton's throw, much to the amusement of the opposing pitcher.

"Miggy does a lot of crazy things in this game, and I love it," Pineda said. "He's a great guy and a great player."

Twins: Pineda missed one start with knee tendinitis. To make room for him on the roster, the Twins sent LHP Devin Smeltzer to Triple-A Rochester.

Tigers: Because of injuries, Gardenhire is unable to use any of his starting infielders on defense. 3B Jeimer Candelario (shoulder), SS Jordy Mercer (quad strain) and 2B Josh Harrison (hamstring) are all on the injured list, while Cabrera is unable to play first base because of his knee.

OF Riley Greene, the fifth-overall pick in this week's draft, met with the media before taking batting practice in his new home park. He hit several long home runs to deep right off Liddle.

"That young man has some very quick hands," Liddle said. "You don't see a lot of kids come right out of high school and hit balls where he hit them."

Greene is expected to report to the Gulf Coast League this weekend.

The teams play the second of three games Saturday. Minnesota's Kyle Gibson (6-2, 3.75) will start against a Tigers opener that has not been announced. Nick Ramirez (1-0, 2.37) is expected to be Detroit's primary pitcher