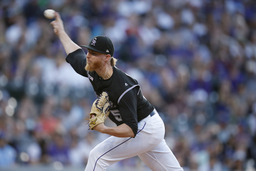 Gray struck out seven before the start of a blister ended his night in the seventh inning, Nolan Arenado singled to extend his hitting streak to 12 games and Daniel Murphy drove in two runs as the Rockies beat the Toronto Blue Jays 4-2 Saturday night.

Gray allowed two hits in 6 2/3 innings and didn't allow a run for the second time this season. He pitched six scoreless innings in a win over Philadelphia on April 21. He said Saturday was his best start of the season.

"I felt like I was in control from start to finish tonight," he said.

David Dahl had three hits as the Rockies won their seventh straight and improve to 8-1 on their homestand. Scott Oberg got the final out for his second save.

Stroman was able to keep an offense in check that had 18 hits in Friday's win over Toronto.

"I pitched seven innings against one of the best lineups in baseball, and I didn't see a single barreled ball to the outfield all game in seven innings," he said. "All weak contact, all ground balls. Seven hits, six of them were ground balls. That's unbelievably hard to do against that lineup."

Justin Smoak spoiled the Rockies' shutout bid with a solo homer leading off the ninth, and after a throwing error by shortstop Trevor Story, Danny Jansen hit an RBI double with two out to make it 4-2. Oberg got pinch-hitter Rowdy Tellez to ground out to end the game.

Gray (5-4) worked out of trouble in the second and sixth innings before leaving in the seventh. He struck out the first two batters and followed that with two walks when a hot spot middle finger on his pitching hand. Manager Bud Black came out and after a discussion he was pulled.

"It really sucks, but it's part of the game," Gray said. "There's always going to be some kind of adversity."

Jairo Diaz came on in relief and got the final out.

Colorado had a relatively quiet offensive night after getting 35 hits in its previous two games. It looked as if it would be another big night at the plate in the first inning when four straight hits off Stroman.

Arenado followed singles by Story and Dahl with one of his own to drive in the first run, and Murphy made it 3-0 with a two-run double past center fielder Jonathan Davis.

"Getting that three-run lead early tonight was really nice," Gray said. "I was able to sit back and pitch my game and not have to worry about, `Hey, if I give up a solo here we're in trouble.' It was nice to be able to pitch like that."

Stroman retired 19 of the last 23 batters he faced, and the only blemish came in the fifth when Colorado tacked on another run.

Raimel Tapia extended his hitting streak to 11 games with a double, and two Toronto errors on the play allowed him to score to make it 4-0.

"Stroman did an outstanding job going seven," Blue Jays manager Charlie Montoya said. "He kept us in the game until the end."

Rockies: OF Charlie Blackmon (right calf strain) did some running in the outfield before Saturday's game and is on track to be activated from the 10-day injured list when Colorado starts its six-game road trip at the Chicago Cubs on Tuesday.

Arenado showed why he has won six Gold Gloves when he ranged to his right to grab Jansen's grounder in the fifth and then side-armed a throw to Murphy at first as he was veering toward the Toronto dugout.

Seeing Arenado make a great play has become normal for the Rockies.

"I knew it was going to happen when I saw him take off sideways," Gray said. "The throw was on the money. I couldn't help but enjoy it."

Not to be outdone, Dahl made a diving catch in right field to save a run in the sixth inning.

Toronto righty Aaron Sanchez (3-5, 3.75) will make the second start of his career at Coors Field. He won his only other outing in 2016, when he allowed one run in eight innings. He will go against Rockies right-hander Antonio Senzatela (3-4, 5.81).