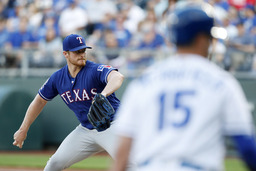 KANSAS CITY, Mo. (AP) Nicky Lopez rewarded the few thousand Kansas City Royals fans that stuck around through a game that stretched well past 3 hours with his first career hit, an RBI single late in their 11-5 rout of the Texas Rangers on Tuesday night.

But as he gazed up from first base, the Royals' top prospect found the ones that mattered most.

"I saw my family up there," he said, "and that's how I always imagined it."

Lopez, who was called up from Triple-A Omaha earlier in the day, was hardly the only Royals player to take some productive swings against the Rangers. Hunter Dozier drove in three runs, and Alex Gordon and Jorge Soler drove in two apiece, as the Royals scored nine times in the first two innings.

They quickly knocked out Shelby Miller (1-3), who was pulled with two outs in the second after he allowed eight runs on seven hits in two walks in another ugly post-Tommy John performance.

Danny Duffy (2-1) was only marginally better for Kansas City, using 107 pitches just to survive five innings. He allowed four runs, seven hits and a walk while striking out seven.

"You make a couple of bad pitches and all of a sudden they get four runs," Duffy said. "When my team gives me nine runs, it's a travesty to not go as long as I can."

Rangers shortstop Elvis Andrus left with tightness in his right hamstring after grounding out to end the seventh inning. He will be evaluated again Wednesday in another blow to a team that has lost five straight to fall a season-worst five games below .500.

"We'll obviously evaluate him tomorrow," Rangers manager Chris Woodward said, "but he seems pretty optimistic. He hasn't had a hamstring problem before. We'll see when he wakes up tomorrow how he feels."

The Royals pounced on Miller right from the start, sending seven to the plate in the first inning and jumping out to a 3-0 lead. But they cracked the game open in the second, when they sent 11 batters to the plate and drove in six runs against Miller and Rangers reliever Wei-Chieh Huang.

The stunning offensive outburst came after Kansas City managed six singles and no extra-base hits in a loss to the Phillies on Sunday. And it came after the arrival of Lopez, who got the start at second base and hit second behind Whit Merrifield in the lineup.

Lopez walked in the third before his first career hit made it a memorable night.

"Nicky had some great at-bats," Royals manager Ned Yost said. "I was glad to see Nicky get his first hit. That's under his belt and now he can move forward."

Joey Gallo had a pair of RBIs for the Rangers, who tried to climb back into the game with a four-run third. But they stranded runners in four consecutive innings, repeatedly failing to get the crucial hit they needed to avoid a 1-6 start to their nine-game, 10-day road trip.

"They put some runs together. They put some big innings together," said Miller, whose ERA ballooned to 9.51 this season. "It's disappointing. I feel like I let my team down big-time."

The Royals originally made up No. 19 jerseys for Lopez, but he asked to wear No. 1 because it was the number his father wore in softball. New jerseys were made and arrived before first pitch.

The Royals made roster space for Lopez by sending right-hander Jake Newberry to Triple-A Omaha and designating first baseman Frank Schwindel for assignment. The Royals are hopeful Schwindel clears waivers and they can keep him in their organization.

Rangers left-hander Cole Ragans, their first-round pick in the 2016 draft, will need a second Tommy John surgery after tearing his ulnar collateral ligament. The 21-year-old Ragans was close to pitching in a game for the first time since his last surgery when he began feeling discomfort about a week ago.

"It's obviously concerning," said Rangers general manager Jon Daniels, adding that surgery will be Wednesday. "This is the first Tommy John surgery we've had that's failed."

The Royals hope Jorge Lopez (0-4, 6.07 ERA) can get on track Wednesday night after a blowout loss to the Astros. He goes against former Royals pitcher Mike Minor, who is 3-3 with a 2.68 ERA for Texas.