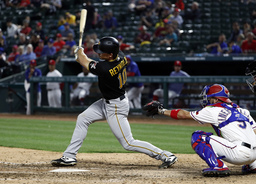 ARLINGTON, Texas (AP) When Bryan Reynolds led off the 11th inning with his first career homer, everybody on the Pittsburgh Pirates' bench erupted in celebration. They were all quiet by time the rookie rounded the bases and got back to the dugout.

"We were all like so quick to hop up and jump up and down, then someone said (silent treatment) and we all knew why," said Josh Bell, who came home and tied the score against the Texas Rangers with a two-run double in the ninth.

Reynolds put the Pirates ahead with his blast to the hill in center field off Jesse Chavez (0-1), and Starling Marte then added a two-run homer as the Pirates ended their eight-game losing streak with a 6-4 win Tuesday night.

"I kind of blanked out, and then I realized what was going on," Reynolds said.

The Pirates were scoreless until getting three-run ninth off closer Jose Leclerc that Reynolds started with a double.

Reynolds has hit safely in all eight of his games since his big league debut April 20, when the outfielder was called up the same day Marte was put on the injured list with bruises to his abdominal wall and ribs.

Marte played his first game since he was involved in a full-speed collision with shortstop Erik Gonzalez on April 19 that sent both players to the injured list - Gonzalez broke his collarbone and is on the 60-day injured list.

Kyle Crick (1-1), who was born in nearby Fort Worth and lives in Sherman about 90 miles north, pitched a perfect 10th. Felipe Vazquez worked the 11th for his seventh save after allowing Joey Gallo's leadoff homer - his 10th being a 467-foot drive into the second deck of seats in right field.

Pittsburgh had three consecutive hits off Leclerc to start to the ninth, including Adam Frazier's RBI single for their first run. Leclerc then struck out two before Bell, who was born and raised in the Dallas-Fort Worth area and grew up a Rangers fan, tied the game at 3 with a two-run double driven the opposite way into the left-center gap.

"That was huge, I felt that support from my friends and family," Bell said. "To be able to come through and pull through for the team right there, I can't ask for much more."

It was the second blown save in seven chances this season for Leclerc, who became the Rangers' closer after Keone Kela was traded to Pittsburgh last July. Kela pitched a scoreless ninth for the Pirates.

Manager Chris Woodward said there would be a discussion about Leclerc's role moving forward, and that he could pitch in some non-save and lower-pressure situations.

"Obviously with a young guy, you don't want to kill the kid's confidence," Woodward said. "I would love to just keep giving him the ball, but I do have to be mindful where his mental state. He wants the ball, but he also doesn't want to feel like he's letting his teammates down. It's a tough situation for him."

Asdrubal Cabrera blooped a two-run single to right in the fourth - MLB stats registered the exit velocity off the bat at 59 mph - to give the Rangers a 2-0 lead. They went ahead 3-0 in the eighth on Gallo's third walk, which came after a passed ball on a strikeout and two other walks had loaded the bases.

STILL LOOKING FOR NO. 1

Rangers starter Adrian Sampson was denied his first big league victory after 5 2/3 scoreless innings. The right-hander struck out five without a walk, and hit a batter, in his 13th career appearance (eighth start) since his big league debut for Seattle in 2016. He was a fifth-round pick by the Pirates in 2012.

Pirates: C Francisco Cervelli was hit on his left wrist by a pitch in the second inning. He initially remained in the game, but two pitches later left the game. He was examined by Rangers team physician Dr Keith Meister, and the Pirates expect an update Wednesday.