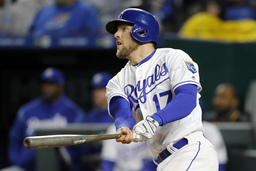 KANSAS CITY, Mo. (AP) Hunter Dozier has been dealing with a nagging back problem that doesn't affect the designated hitter at the plate so much as when he runs.

Maybe he should stop hitting triples.

Dozier had a pair of them, each driving in two runs, and added two singles to set career highs for hits and RBIs in Kansas City's 9-4 win over the Los Angeles Angels on Saturday night.

"Yeah, I think every hit makes it feel better," Dozier said of his tender back, which caused him to miss some time recently. "Just keep trying to play through it."

Kelvin Gutierrez drove in two runs in his big league debut for Kansas City, and Adalberto Mondesi had three hits in a game that dragged on for 3 hours, 40 minutes. The teams combined for 10 pitchers, 22 hits and 17 runners left on base on a cold, blustery evening at Kauffman Stadium.

Scott Barlow (1-0) navigated five outs in relief of Jorge Lopez to earn the win, while Jaime Barria was tagged with an ugly stat line and the loss for Los Angeles.

Barria (2-2) was listed as the starter but came in after Cam Bedrosian tossed a scoreless first inning. Barria proceeded to allow seven runs and 10 hits over 1 2/3 innings.

Speaking through an interpreter, Barria pegged some of his trouble on the brutal wind and temperatures dipping into the 40s by the end of the game - "I had trouble with the feeling," he said.

The game was knotted 1-all in the third when the Royals paraded 11 batters to the plate.

They cranked out eight hits and plated six runs with Gutierrez and Dozier doing most of the damage. Mondesi wound up with a pair of singles in the inning, the first Royals player to accomplish that feat since Ryan Goins last May against the Twins.

The Angels threatened to answer the six-spot in the fourth when they battered around, but they failed to take advantage of three walks and only scored three while leaving the bases loaded.

Dozier added his second two-run triple in the fifth to restore some of the cushion.

"I'm swinging the bat well right now," he said. "Just trying to keep it simple, a simple approach. Tonight was a good night all around."

Mike Trout drove in a pair of runs for Los Angeles, but that was just about the only bright spot on another tough night on the road. The Angels fell to 3-15 in their last 18 road contests, and they still have not won back-to-back games away from home since last September.

Royals outfielder Alex Gordon and catcher Salvador Perez were presented with their Gold Gloves before the game. It was the sixth for Gordon and fifth for Perez, who is out for the season after reconstructive elbow surgery. The ceremony was postponed from opening day due to weather.

Gutierrez was called up Friday night after hitting .333 at Triple-A Omaha. The 24-year-old third baseman was acquired by the Royals last June for longtime reliever Kelvin Herrera.

The Royals recalled left-hander Ben Lively from Omaha and optioned right-hander Heath Fillmyer to the same club prior to the game. Lively was 2-1 with a 4.41 ERA in four appearances there.

Angels: DH Shohei Ohtani made six plate appearances against a right-hander prior to the game as he continues to rehab from Tommy John surgery. He also threw out to 100 feet, Ausmus said.

Angels right-hander Matt Harvey, who made two starts against Kansas City in the 2015 World Series, starts the series finale Sunday. Right-hander Homer Bailey is on the mound for the Royals.