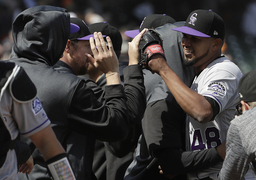 Marquez pitched a one-hitter, nicked only by Evan Longoria's single with one out in the eighth inning, and the Rockies stopped an eight-game skid by beating the San Francisco Giants 4-0 Sunday.

"That was a gem today, it really was," Rockies manager Bud Black said. "I was really proud of German. From the first pitch on there was a great intent and he built momentum as the game went on. He had life to the fastball and the breaking pitches were outstanding."

Ubaldo Jimenez pitched the only no-hitter for Colorado in 2010 at Atlanta.

"I looked up in the sixth and they still had no hits," Marquez said through a translator. "That's when I knew I had all my pitches working. I knew today especially with the losing streak the team needed me. I was happy to go out there and provide that."

Marquez had allowed just one runner, hitting Kevin Pillar with a changeup to begin the sixth inning, and was in complete control heading into the eighth.

Brandon Crawford opened the eighth with a hard, one-hopper that deflected off third baseman Nolan Arenado's glove. Arenado quickly grabbed the ball out of the air and zipped a throw to retire Crawford.

Longoria followed with a grounder in the hole, just beyond Arenado's dive. The Gold Glover took off his mitt and slammed it to the ground, shouting that the no-hit bid had been broken up.

"I was just frustrated, I wanted him to get it so bad," Arenado said. "This year's been tough and it was really cool to see him go out there and pitch like that. He did an unbelievable job."

The 24-year-old Marquez made his second start since signing a $43 million, five-year contract.

"He's going to throw a lot of games like that, that's how good his stuff is," Giants manager Bruce Bochy said. "We just had our hands full today."

Arenado provided all the support with a three-run homer, his first this season. The four-time Silver Slugger entered the day batting .246 with six RBIs.

Prior to Longoria's hit, Colorado center fielder Ian Desmond made a diving catch and right fielder Charlie Blackmon had a sliding grab to preserve the no-hit try.

Arenado walked and scored on Trevor Story's double in the third. Arenado then ended his power drought with a towering home run off Giants starter Derek Holland in the fifth.

Travis Bergen, Trevor Gott and Nick Vincent each threw a scoreless inning for the Giants, extending the bullpen's scoreless streak to 20 innings. Collectively, San Francisco's relievers have a 1.77 ERA.

Arenado's home run was his 25th against the Giants, second-most among active players behind Matt Kemp's 26. Eleven of those have come at Oracle Park, tying Paul Goldschmidt for the most among active visiting players.

"I was waiting for a mistake and I was able to take advantage of it," Arenado said. "It felt amazing to finally contribute and drive in some runs."

Rockies: Kyle Freeland checked out fine a day after developing a blister on his left middle finger. Black doesn't expect Freeland to miss his next turn in the rotation.

Giants: OF/1B Tyler Austin underwent an MRI on his right elbow after injuring it during a pre-game workout earlier in the week. Although the test came back negative, Austin could still be placed on the injured list.

Rockies: Black has yet to name a starter for Monday's game at San Diego. RHP Antonio Senzatela, who rejoined the team in San Francisco after completing a rehab assignment in the minors, is the leading candidate.

Giants: RHP Dereck Rodriguez (1-2, 4.15) faces the Nationals and ace Stephen Strasburg in the opener of a three-game series in Washington on Tuesday.