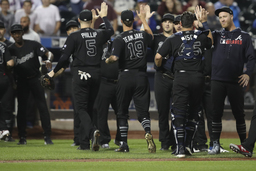 The Atlanta Braves might have figured out the recipe for never losing again. And even if they haven't, Sunday's series finale is nonetheless coming not a moment too soon for the New York Mets.

The Braves will look to complete a three-game sweep of the National League East rivals in New York. Dallas Keuchel (4-5, 4.14 ERA) is scheduled to take the mound for Atlanta against New York's Steven Matz (8-7, 4.18) in a battle of left-handers.

The Braves handed the Mets another potentially damaging loss Saturday night, when they scored twice apiece in the eighth and ninth innings for a 9-5 win.

For the second straight night, the Braves were fueled by new arrivals. Francisco Cervelli, who signed with Atlanta earlier Saturday, went 3-for-5 with a pair of doubles and three RBIs. He also threw out Amed Rosario as the Mets' shortstop tried stealing second base in the seventh.

Immediately before Cervelli threw out Rosario, Adeiny Hechavarria -- who was designated for assignment by the Mets on Aug. 9 and signed with the Braves on Aug. 16 -- threw out Jeff McNeil as he tried to advance to third on Rosario's grounder.

And the Braves' tie-breaking eighth-inning rally included a hit by Billy Hamilton, who scored the final run when he raced home from third as Mets left fielder J.D. Davis casually ran the ball towards the infield. Hamilton, who was designated for assignment by the Kansas City Royals on Aug. 16 and claimed three days later by the Braves -- who are behind New York in the waiver process -- had the tie-breaking RBI single in the 14th inning of Friday's 2-1 win.

"It's amazing," Braves first baseman Freddie Freeman said. "After (Cervelli) got that hit in the second inning, I just said, 'Well, just get a new guy every single day.' "

The Mets had their own amazing moment in the fifth inning, when rookie first baseman Pete Alonso gave New York a 5-4 lead with a three-run homer. It was Alonso's 41st homer, tying the team record held by Todd Hundley (1996) and Carlos Beltran (2006).

But instead of building on that momentum, the Mets lost back-to-back games to the Braves for the second time in fewer than two weeks. Those consecutive losses are the only losing streaks for New York since July 20, a span in which it has gone 23-9 to jump back into the National League wild-card race.

This weekend's losses could be particularly costly for the Mets, who missed a chance to gain ground on the Chicago Cubs, who lead the race for the second wild card but have lost two straight to the Washington Nationals.

"Yeah, those two losses are tough, but all of us in this locker room are pretty high-character guys," Alonso said. "We've come a long way to get here and we still have a really good opportunity ahead of us."

Both Keuchel and Matz earned wins last Tuesday. Keuchel allowed one run over six innings as the Braves beat the Miami Marlins, 5-1. Matz gave up two runs (one earned) over 6 1/3 innings in the Mets' 9-2 win over the Cleveland Indians.

Keuchel didn't factor into the decision in his lone start against the Mets on Aug. 14, when he tossed six scoreless innings in the Braves' 6-4 win. Matz is 5-1 with a 3.39 ERA in 11 career starts against the Braves.