Mets aim to improve in NL East race vs. Braves 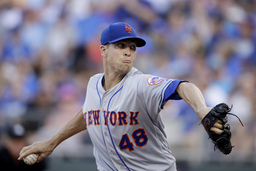 For about a month, the focus for the New York Mets in terms of likely ways into the playoffs has been on a crowded National League wild-card race.

This weekend if things go right, the Mets can make a small dent in the NL East race and they will get three chances to gain ground starting Friday when they host the Atlanta Braves for the opener of a three-game series.

The Mets (67-60) are a major league-best 27-10 since the All-Star break and trail the Braves by nine games in the division. They are 1 1/2 games behind in the wild-card race after extending their winning streak to five games and improving to 13-1 in their last 14 home games with a 2-0 victory over the Cleveland Indians on Thursday night.

Wilson Ramos had a two-run double to extend his hitting streak to 16 games, the longest by a Met since Carlos Beltran also hit in 16 straight in 2009. During the streak, he is batting .391 (25-for-64) with three homers and 14 RBIs.

Atlanta leads the season series with the Mets 8-5 and enters this weekend with five straight wins after Ronald Acuna Jr. had the game-winning single in the ninth inning of Thursday's 3-2 win over the Miami Marlins.

Freddie Freeman hit a game-tying homer Thursday and has nine homers in his last 20 games. He also is hitting .327 (16-for-49) with four homers and 10 RBIs against the Mets this season.

"We just want to make sure we come out every day with the same energy, same passion, love for the game, and God willing, see everybody in October," Acuna said.

The reigning NL Cy Young award winner last pitched Saturday in Kansas City when he allowed one run on three hits in seven innings of a 4-1 win.

Foltynewicz last started in a 4-3 win over the Los Angeles Dodgers on Saturday when he took a no-decision after allowing two runs on seven hits in 4 2/3 innings.

He is 1-1 with a 5.91 ERA in five career appearances (four starts) against the Mets.